As we discussed in previous chapter, handover is based on 3 steps as below:

Consider the image below 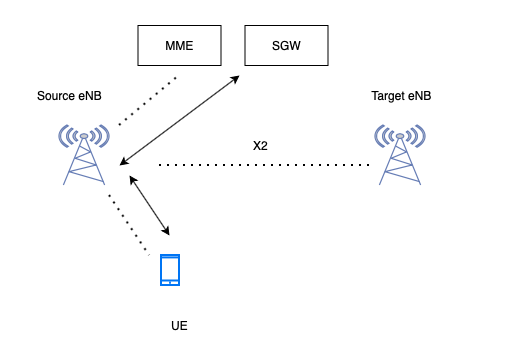 We have 2 eNB, source eNB and Target eNB. We have MME and SGW. SGW is connected to PGW.

Both source eNB and target eNB are connected to each other with help of X2 interface.

During initial attach request, eNB will send “RRCConnectionReconfiguration” request. It will have measObjectId, reportConfigId (A1, A2…). Based on these configuration, UE will make the decision.

Step 1:
Now, UE will move towards Target eNB, then UE will send measurement report to source eNB. It will include “rsrpResult” and “rsrqResult”.

Step 2:
Source eNB will send a “HandoverRequest” message to TargeteNB.

It will have target eNB cellID, details of ERAB (QCI, ARP, S1 SGW TEID (UL)) to be established.

Step 3:
As source eNB is sharing “S1 SGWTEID”, target eNB will make a uplink bearer to SGW with the help of “S1 SGWTEID”. Now only UL has been established from Target eNB to SGW. But till now downlink is not established.

Step 4:
Target eNB will create “DRB ID”, “C-RNTI: Identifier for UE in a cell”, “X2 Target eNB TEID”.
These 2 details will be shared to source eNB and then source eNB will share to UE.

Step 5:
Target eNB will send HO Req ACK. It will send all the ID’s created in previous step.

Step 6:
Now source eNB will create a bearer towards target eNB. It is called as X2AP direct tunnel.
This is because, the source eNB can forward packets received from SGW to target eNB. 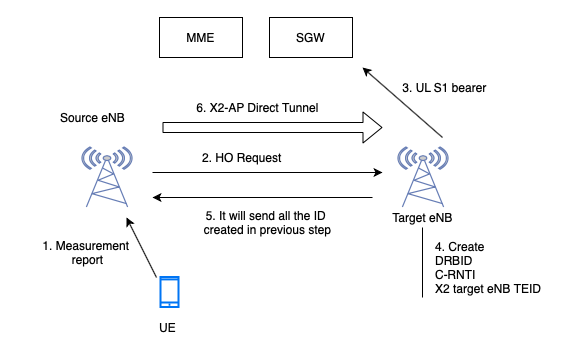 Step 1:
HO command. Here source eNB will send “RRC Connection Reconfiguration” to UE.
In this request, “DRB-ID” and “C-RNTI” will be shared to UE. These 2 ID’s will be generated by target eNB.

Step 2:
Source eNB will send “Status Transfer” message to target eNB.
It will have “DL Count” and “UL Count”.

Step 4:
Now suppose, UE is in the coverage of “target eNB”. Target eNB will send a “Contention Free Random Access(CFRA)”.

So till now the data flow is like below:

Full call flow of X2 Handover is as shown below: 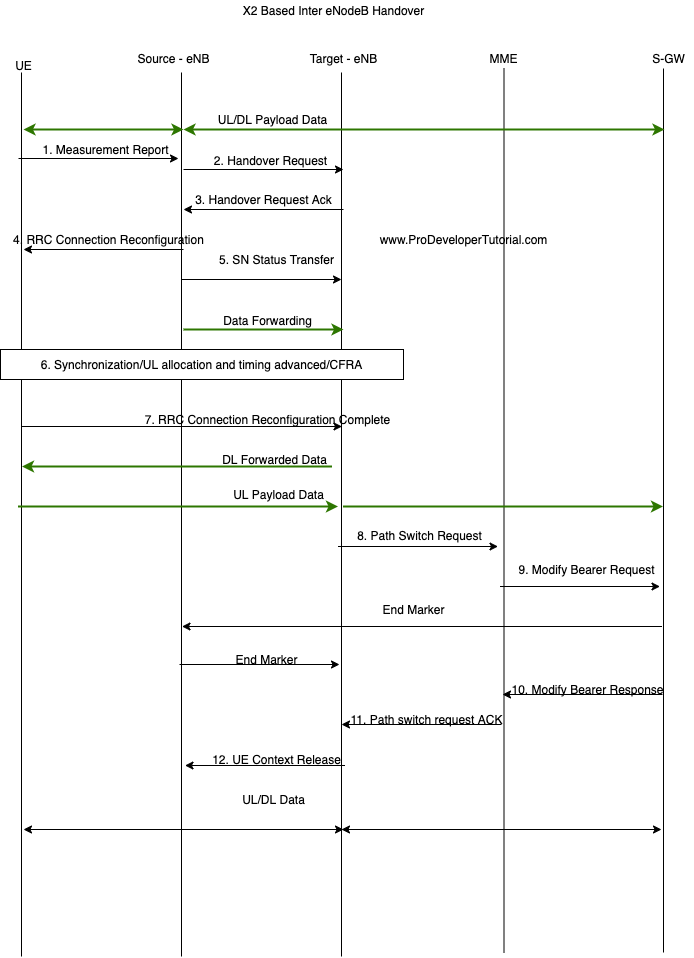