HARQ stands for Hybrid Automatic Repeat Request (HARQ).
This is a physical layer functionality in LTE.

It means, if the sender doesn’t receive ACK from the receiver before timeout, then the receiver will discard the packet and sender will retransmit the packet. 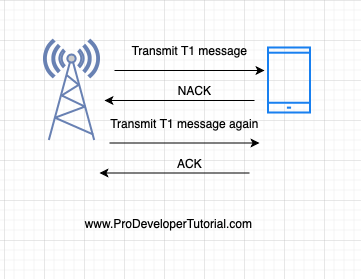 The eNB is sending T1 block to the smart-phone, but the smart phone has received half of the data. Hence it will send a NACK. Again the sender will send the same T1 block again.

This is not an efficient way to handle the error.

Soft Combining one method to correct the errors. Errors might be due to the bad packets, that might have lost during the transmission.

In soft combining, the bad block will not be discarded, but will be kept, and bad packets will be taken from the next re-transmitted block. This is called as HARQ.

This type of HARQ is used in LTE.

This is across 2 layers, between MAC and Physical Layer.

MAC layer will do Incremental Redundancy

Physical Layer will do the Soft Combining

Incremental Redundancy: It is change the coding from transmitted from re-transmitted.

It will have maximum of 8 level. After that, it will drop the packet fully.

There are 2 level of re-transmission for error correction.
HARQ at MAC layer
ARQ at RLC layer.

ARQ will try to handle errors that are not corrected by HARQ.

In Synchronous HARQ, retransmission is known at what time it will occur. Hence this will not require the packet number for retransmission. It can operate in minimum signaling overhead.

In asynchronous HARQ, retransmission processes can occur at any time. Hence, explicit signaling like HARQ process number is required to transmit each retransmission packets. This will require a signaling overhead.

In adaptive HARQ, transmission parameters like code rate, number of resource allocation, and modulation order may change during retransmissions.

In non-adaptive HARQ, retransmission packet format is not changed or know to both communicating parties.

HARQ Type2:
FEC and ED (Error Detecting) will be known to decrypt the data block correctly.

In FDD, ACK/NACK refers to the downlink packet.
In TDD, ACK/NACK timing depends on the uplink/downlink configuration.
UE can request retransmission of data packets that were incorrectly received on PDSCH
8 HARQ process can be used.