In this tutorial we shall learn about what is P, NP, NP hard, NP Complete problems.

This is a complex topic. I have tried my best to make you understand in a easy way.

Now, what is Polynomial Time?

Any algorithm is said to take Constant time, if we are able to get the value by doing single operation irrespective of input size. It is written as O(1).

Linear time: Any algorithm is said to take linear time if the time complexity is O(n). It means, the time consumed will be increased as input size increases.

An algorithm is said to take polynomial time, if the upper bound of a polynomial expression is O(n^k) where k is a constant.

The above problem can be solved at deterministic polynomial time.

Below are some of the algorithms that can be solved in exponential time:

An algorithm, where the steps are clearly defined is called as deterministic algorithm.

The algorithms that shows different behavior for same input, are called as non deterministic algorithms.

Before going to our main topic, let’s understand one more concept.

Now coming to out main topic:

For these kind of problem, there are efficient algorithms that are designed to solve in polynomial time at the worst case.

So P is a class of decision based problems that can be solved efficiently.

For NP class problems, we don’t know how to solve them efficiently. But we try to verify the answer efficiently thus having a proof.

So NP is a class of decision based problems, that can be verified efficiently. It means that there is an algorithm present that can verify the output of the problem.

So P class problems, that can be efficiently solvable.

NP class problems, that can be efficiently verifiable.

So most of the time, we hear that P = NP, if and only if, the problem in class P are efficiently verifiable.

Before going to learn about NP hard and NP complete, we have to understand what is reduction based problem?

If you have a problem “M”, it can be reduced to another problem “N” and that “N” problem can be efficiently solved. These kind of problems are called as reduction based problems.

Properties of Reduction based problem:

The group of problems what are both NP and NP hard is called as NP Complete Problems. 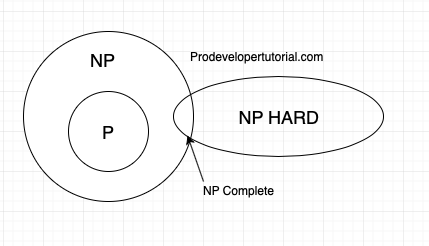 The intersection of NP and NP hard set of problems are called as NP complete.

If you have any doubts, please write in the comment section below:

AJ’s definitive guide for DS and Algorithms. Click here to study the complete list of algorithm and data structure tutorial. 85+ chapters to study from.