In this chapter we shall learn about:

Graph like trees is a non linear data structure. Like trees, graph is also made of collection of nodes/vertices and edges. But unlike trees, graph will not have any root node. In fact, you can start to traverse from any node and move in any direction.

Below is an example of a graph. 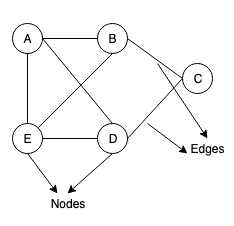 As you can see in above image:

A graph G is an ordered pair of a set of “V” vertices and a set of “E” edges.

Identify the vertices from the below graph image 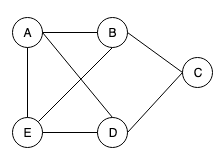 Identify the EDGES from the above graph image

An edge can be defined as the path between 2 vertices. Here edges can be of 2 types. Directed edge and Un-Directed edge. The above image is of un-directed type. In further chapter we shall study about directed edges.

If the edges are labeled, then it is called as weighted graph. Both directed and undirected graph can have a weighted edge.

A directed graph with at least one cycle is called as cyclic graph.

A directed graph with no cycle is called as acyclic graph

A graph will be called as connected graph, if there exist one path that connects all the vertices.

A graph will be called as disconnected graph, if there is no path between 2 vertices.

Note: A graph can have both directed and undirected edges at the same time. But in this series, we shall learn about the graph that are either directed or undirected.

AJ’s definitive guide for DS and Algorithms. Click here to study the complete list of algorithm and data structure tutorial. 85+ chapters to study from.