A shell is an interface between kernel and user. Shell accepts commands from the user and executes it in the kernel and shows the output to user. Initially there was no GUI for Linux, users used to interact with the shell with the help of terminal. In this tutorial we shall learn about shell scripting, a computer program to execute in the shell.

Bourne shell is the most popular shell today.

To know the type of shells you have, type “cat /etc/shells“. This command will give you the list of shells present in your OS.

For me if I type “cat /etc/shells“, then it will give me the below output.

“sh” stands for Bourne shell. This was the original shell. It is still used in Linux/Unix.

“bash” stands for “Bourne Again Shell”. This is an update on “Bourne shell”.

Now a days “bash” is used as a standard. In this tutorial we shall learn about “bash”.

To know where the bash is located, you need to type the command “which bash”. In my system it will produce below output:
/bin/bash

A shell script is a series of command written in plane text. A shell script will and with “.sh” extension. Although the extension is not mandatory, it is recommended.

1.2 what are the uses of shell script?

1. It is used to automate regular works.
2. It can be used to create a new command using combination of commands.

A typical shell script file can be created by using basic editors like vim. The file should have a “.sh” extension. Then you need to give the execute permission for that script to run.

The Shebang “#”
So every shell script we should specify which interpreter should be used. This should be specified in the first line by using “#” following the absolute path to the bash interpreter.

if you don’t specify the interpreter line, by default it will use “/bin/sh”.

How to execute a script?

Let’s suppose you have have created a “testScript.sh” file. Now there are 2 ways to execute the script.

You need to give execute permission to the file by using “chmod”.
chmod +x testScript.sh
Then
./testScript.sh

Comment are the way to inform other developer about the code flow. That other developer might be you, at a later point in time. A good written program should add comments wherever necessary.

In shell script we use hashtag “#” to indicate a comment. If there is any line staring with “#” it will be treated as a comment.

“echo” is a command that is used to display the output to the user.

As shown from the above image, it just displays the test written inside the quote in the next line.

-n A new line will be added after the output. Using “-n” option will not insert a new line.

By using certain ANSI codes, we can display the output in colour format.

Below are the numbers for different colours, both for foreground and background. 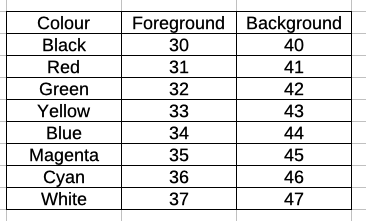 <colour_code> is the code to be entered.

m It terminates the escape sequence.

this will be red color

this will be green color

this will be in yellow background color

this will return to normal mode

Output of the above commands:

So by using what we learnt in the above steps, let’s execute our first shell script:

Step 2:
Copy paste the below content in the text file.

Step 5: Execute the script to get the below output:

Note: Unlike other languages like C, C++, there is no need to enter semicolon at the end of the statement.